Author: Bob Alaburda
Date: 05/07/2013 09:13pm
Other posts from Bob Alaburda
The ADA recently sent out a press release that reminded parents of the possibility of transmitting cavity-causing bacteria to babies via pacifiers. According to the ADA, it is not advisable for a parent to lick a pacifier and give it to their baby, which can transmit Streptococcus mutans and other pathogens that increase the risk of cavities.
This is some great advice for parents of young children. Hopefully, it will prevent adults from unknowingly increasing caries risk factors in their children and contribute to better overall oral health.
Here is some more info from the release:
“A child’s teeth are susceptible to decay as soon as they begin to erupt,” said Dr. Jonathan Shenkin, a pediatric dentist in Maine and a pediatric dental spokesperson for the ADA. “Cavity-causing bacteria, especially Streptococcus mutans, can be transferred from adult saliva to children, increasing their risk of getting cavities.”
The ADA recommends that parents protect the dental health of young children by promoting a healthy diet, monitoring their intake of food and drink, brushing their teeth or wiping gums after mealtimes and by having infants finish their bedtime or naptime bottle before going to bed. The ADA recommends that children receive their first dental visit within six months of eruption of the first tooth and no later than 12 months of age. 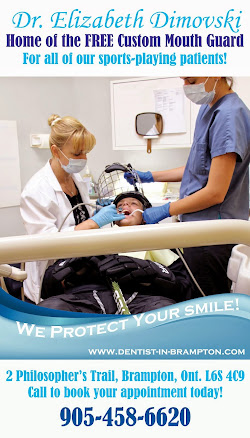 If you are looking for a dentist in Brampton for you and your family be sure to call our office for the best dental treatment possible.
Dr. Elizabeth Dimovski - Brampton Dental Office
905-458-6620

Check us out Online